Just in case you'd forgotten, the Mars rovers Spirit and Opportunity are still up there, still doing their thing more than two years after they landed. Two years! Imagine that--for machines that were designed to last only 3 months! IMHO, that puts the rovers right up there with Pioneer, Voyager, and Cassini in the annals of space exploration. The guys at JPL deserve medals. 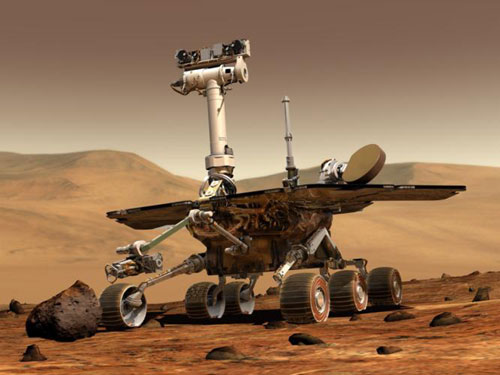 Opportunity is still in pretty good shape and continues to explore Meridiani. Spirit, on the other hand, is further from the Martian equator and has lost a wheel, is down to about an hour of driving time per day, and has been desperately trying to reach a north facing slope so that it can survive the upcoming Martian winter. But it looks like the Rover team just got a break. After struggling through soft sand for weeks, Spirit has made it to an outcropping called Low Ridge Haven where it can get enough power to survive till next spring.

So with luck we'll see another year of exploration for the astounding rovers.

Those things ARE truly amazing, aren't they? Maybe they can dig a little hole in some 'north facing slope' for George up there...

Neil Shakespeare, at 7:41 PM
Now, if we can build cars that durable that are not dependent on fossil fuels...

PoliShifter, at 8:41 PM
Personally, I'm looking to book a trip to the 10th planet. I think this is where Neil could excel with a naming contest.

By the way, I like that blog roll on a conveyor belt, kind of slick.
I'm just happy to be back traveling the circuit after and disasterous upgrade.

RichM, at 5:32 AM
I'd settle for a government that could deal with a major hurricane.

reality-based educator, at 5:40 AM
Neil, that's actually how the rover got into trouble. It caught a likeness of G.W. on camera and was so frightened that it backed into the soft sands without looking.

PoliS, amen! Think of how easy parallel parking would be with six wheels that could point in almost any direction.

Rich, Thanks, it's done with the "marquee" tag. Doesn't work quite right in Firefox though. Bummer.

Kvatch, at 6:02 AM
PoliShifter took my words right off my keyboard, so I'll just say, ditto.

pissed off patricia, at 7:09 AM
The rovers are kind of like my dad... he has congestive heart failure, and his doctor told our family Dad should have died a couple of years ago, but he just keeps on going.

snaveevans, at 9:19 AM
Personally, until the government manages to reign in the deficit and create better paying jobs, I think we should curtail spending on this kind of stuff.

Kathy, at 9:29 AM
Personally, until the government manages to reign in the deficit and create better paying jobs, I think we should curtail spending on this kind of stuff.

Kathy, though I understand the sentiment, where space exploration is concerned I still get a little misty-eyed and start seeing little American flags flying in the background. Especially when you have a mission as spactacularly successful as this one.

Consider, that each Mars rover cost about $425M that's about a quarter of what the Viking mission cost (in adjusted dollars) and is equal to a single day of spending in the Iraq war.

Kvatch, at 11:20 AM
This is exciting. Still waiting for the solar dust data to come in, though. Read we have a probe near Venus right now, and we have a project to go to Pluto... it's all very exciting.

(Astronomy.com is a great site BTW.)

Kathleen Callon, at 11:43 AM
Europe's Venus Express is gettin' comfortable in orbit as we wake.
Here's hopin' it has 1/3 as much success as the Rovers on Mars! Those mechanical critters have simply been incredible in their durability.

And, honestly, the government DOES create better jobs by feedin' more of its Tax Collected Capital into the Space Program. The ROI from NASA investments is akin' to having a 30% flat tax w/ no freakin' loopholes or deductions.

Defense and run of the mill Pork are the sinkholes of wealth in this country. NOT space exploration nor knowledge searches in general.

MichaelBains, at 2:24 AM
Consider, that each Mars rover cost about $425M...and is equal to a single day of spending in the Iraq war.

Put in that perspective, I have to back down on my position. What we need to do is end the war before there is no money left for anything worthwhile.

Kathy, at 11:37 AM
Put in that perspective, I have to back down on my position. What we need to do is end the war before there is no money left for anything worthwhile.

Right you are! As Michael put stated, we need to focus on the real money-sinks--the one's with lousy ROI.

Kvatch, at 12:47 PM
I have been following the story of these two since the beginning, and I'm thrilled with it. My oldest child is 7, and it is so much fun to share the excitement of seeing and learning about another world with him. Mars is our favorite planet next to the pretty blue marble one. We have learned so much about science together just seeking to find out more about Mars. That's priceless. Beats the heck out of slaughtering humans.